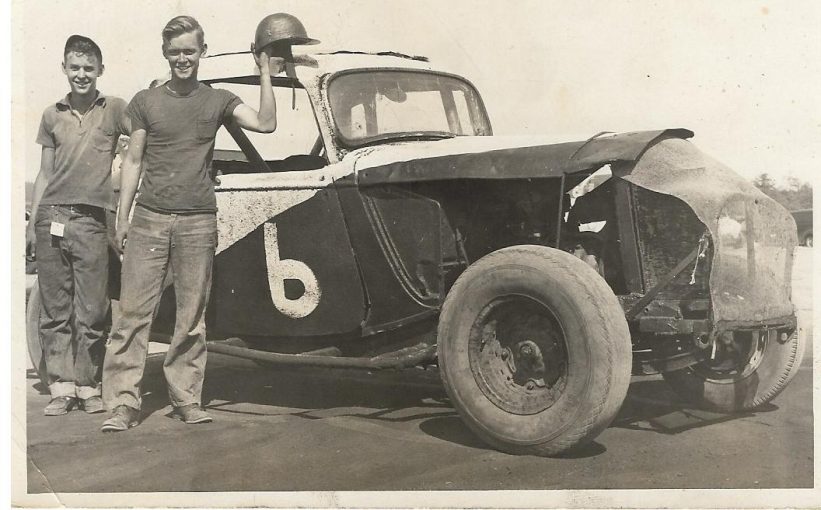 Bob is on the left. 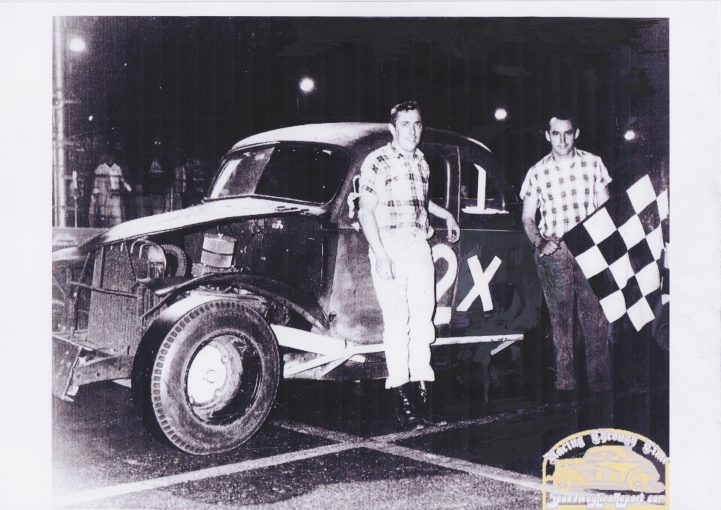 This is Bob’s first 2x coupe, driven by among others Tony Mordino, Gene Bergin, Fats Caruso, Jerry Wheeler, and Ed. In this photo, driver Billy Harman is on the left. Photo from Racingthroughtime.com. 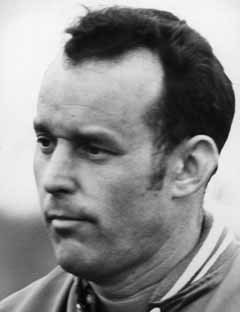 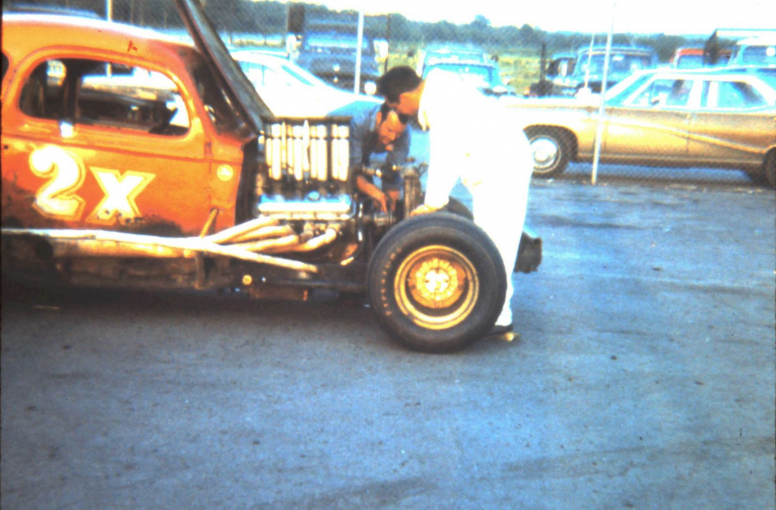 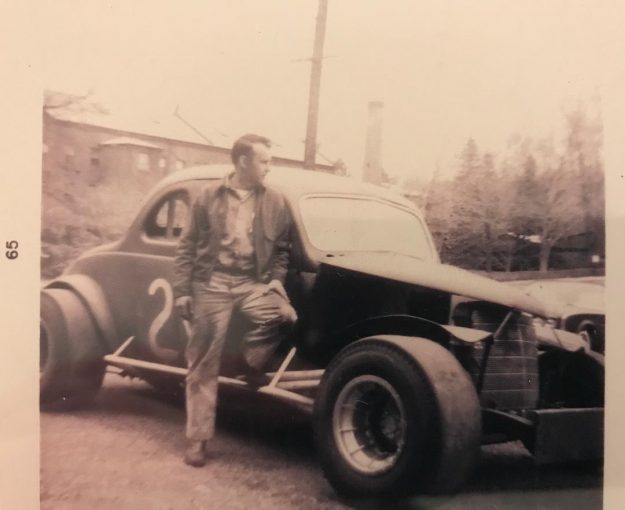 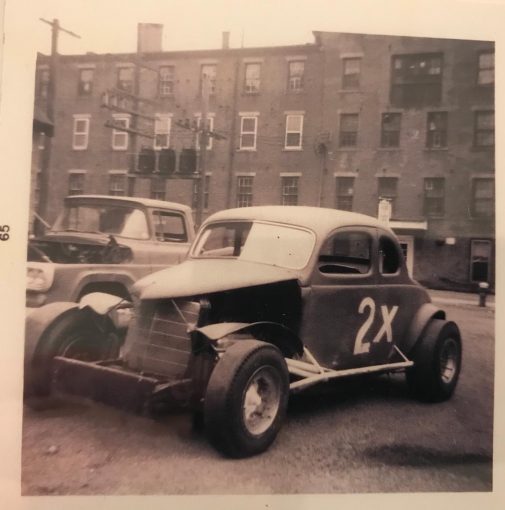 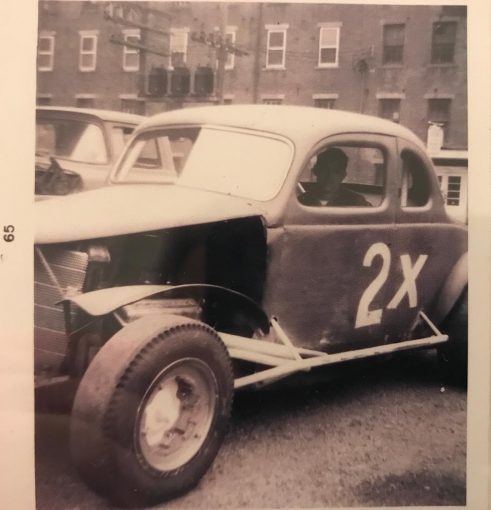 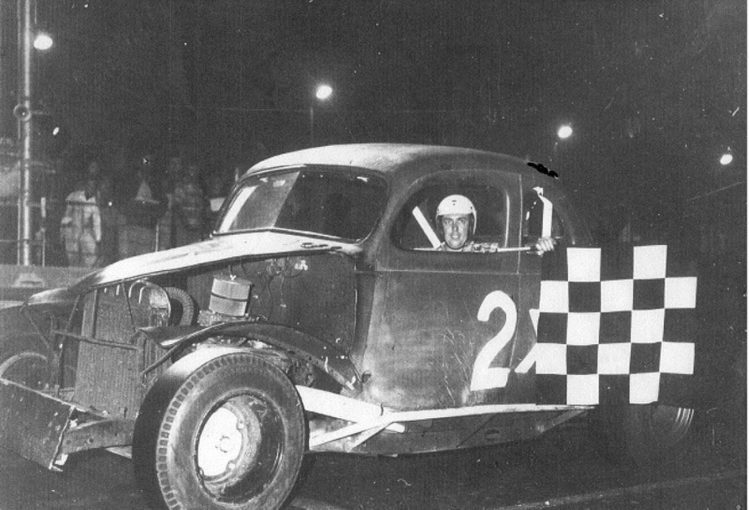 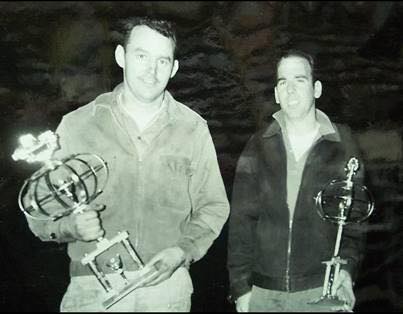 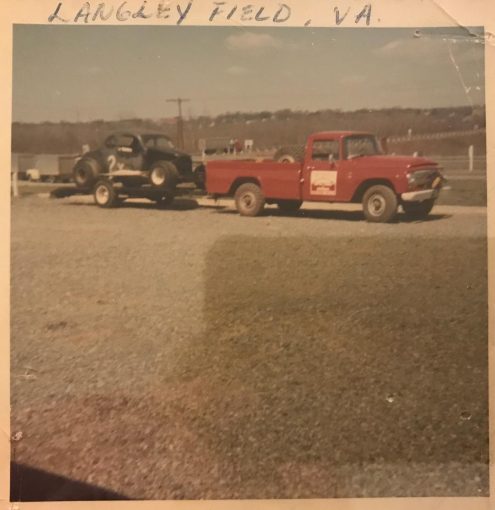 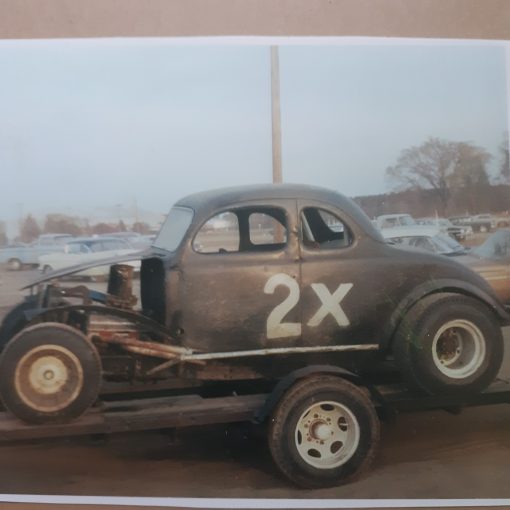 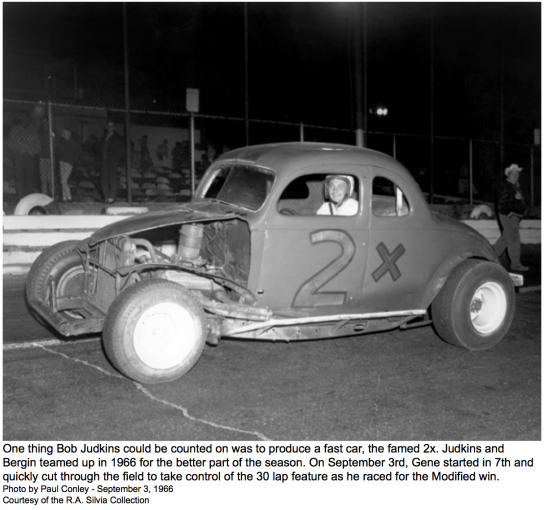 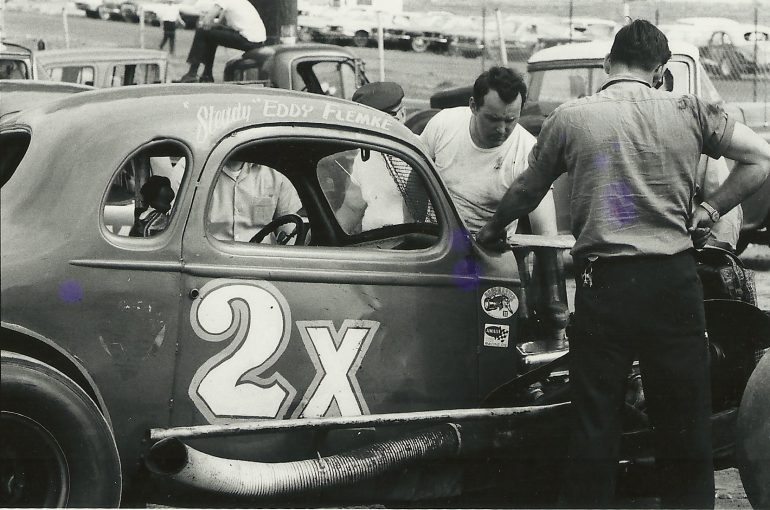 Owner/builder Bob Judkins is in the white t-shirt. Photo by Bob Howley. 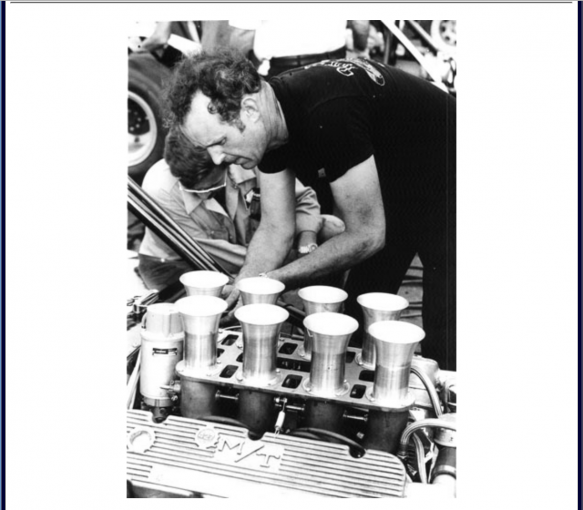 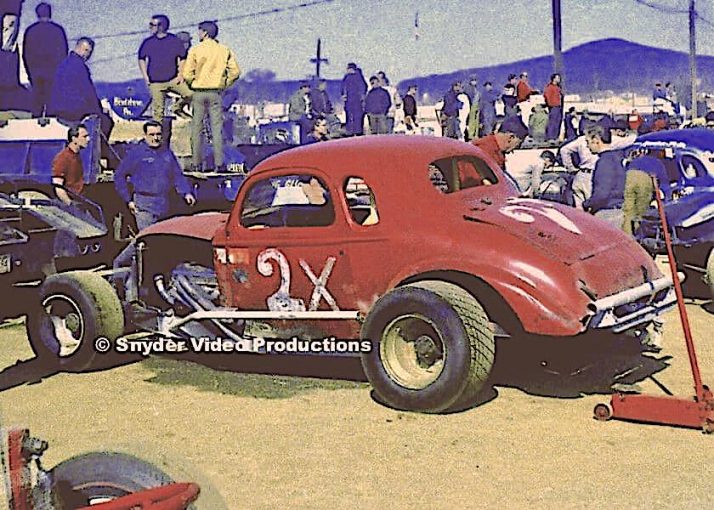 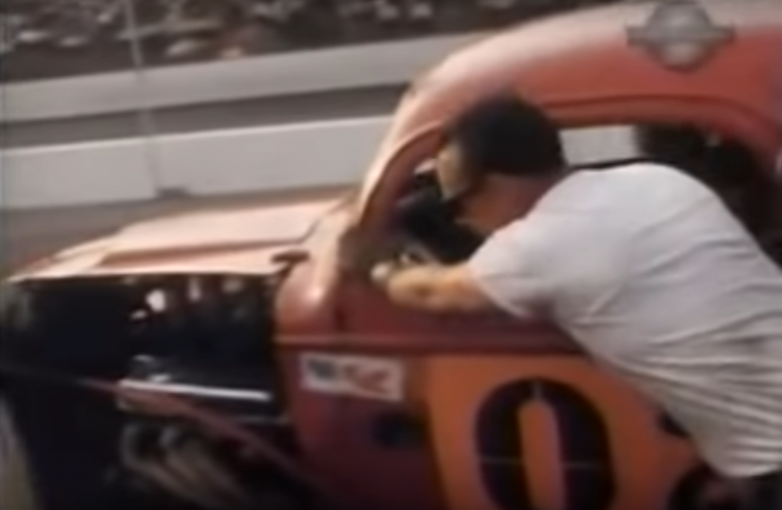 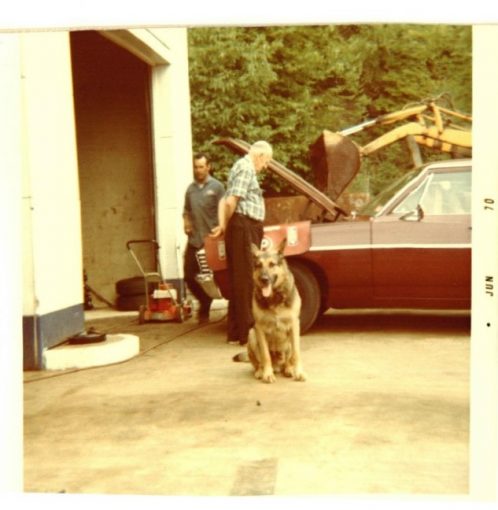 Facing the camera is Major, a German Shepherd given to Bob by Ed. This was after Bob had enlarged the window openings of the car and was racing it pretty much full-time on dirt. Photo taken at Bob’s garage on the Berlin Turnpike. 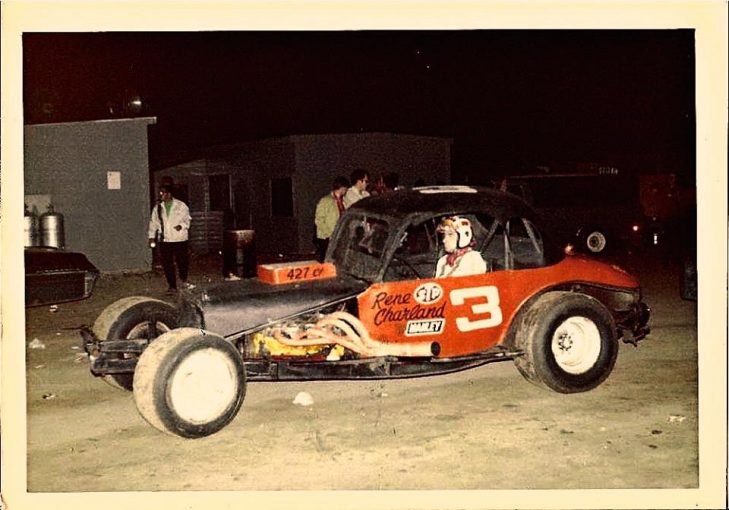 This had been the 2x coupe. This photo was taken after Tiny Lombard had bought the car from Bob and turned it into a full-time dirt car for Rene Charland to drive. This is the first 2x Pinto under construction at Bob’s garage on the Berlin Turnpike. Photos by Arthur Christy, from the Chuck Grime Collection via Fran Lawlor. 1971-05-02 – This was the first-ever Modified Pinto, which inspired Bob Judkins to built his famous 2x Pinto. This photo was taken upon driver Seabury Tripler’s first win, in 1971 at Waterford. This photo was reported to have been taken at the second Devil’s Bowl outing of the 2x Pinto on July 11, 1971. The car’s first race at Devil’s Bowl was on June 27, 1971, when Gene Bergin DNF’d after hitting the wall (thanks to Justin St. Louis for the information). Prior to its races at Devil’s Bowl, the car’s very first race was on June 20th in the 100-lap Getty Open at Oxford Plains, where Gene drove it to a fourth-place finish. It next raced at a Stafford Springs open-comp show on June 23rd. The car’s first win was the Getty Open at Oxford Plains on July 18th. On July 24th the car was allowed for the first time to race in NASCAR, at Stafford Springs. Photo by Lew Boyd of Coastal 181. This photo was taken after the original 2x Pinto’s first win, at Oxford Plains on July 18, 1971. 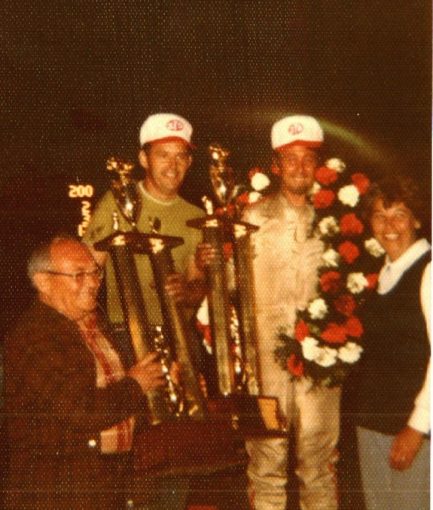