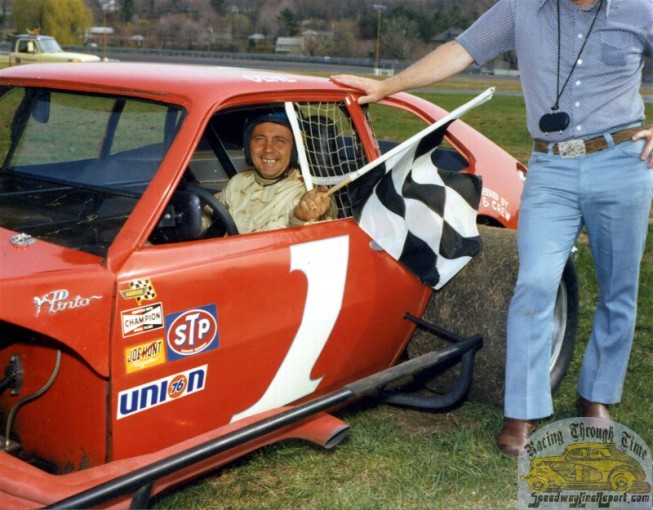 In the 1974 Stafford 200, while driving the Garbarino Mystic Missile #4, Ed had a huge crash. When it came to rest, the car was on its roof, which was crushed flat. After being helped out of the destroyed car, Ed went to the pits where he climbed into the Armstrong #1 Pinto, in which he intended to return to the race. Before he had got the car out of the pits, however, Ed felt sufficient pain in his back that he realized that he should get medical attention rather than immediately resume racing. Ed went to the hospital later that night, where he was told that he had broken his back in a way that usually resulted in the victim’s being paralyzed for life.
This was as close as Ed ever came to racing the Armstrong Pintos, which enjoyed a very big budget and, in Hop Harrington, one of the finest chief mechanics in the sport. One has to believe that if Ed, rather than Geoff Bodine and Ray Hendrick, had been the regular driver of the Armstrong Pintos, the combination would have been devastating. In this photo, from Racingthroughtime.com, Gene Bergin is at the wheel.